Time to Make the Birthday Doughnuts

Posted on October 13, 2015 by Becky Brillon Leave a comment 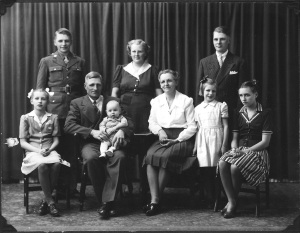 My Great Grandmother, Edith was born on October 7th 1902. The photo above was taken in 1944 while my Grandfather was home on Christmas furlough between basic training and his entry into the war – first stop, Battle of the Bulge.

A farm family of seven children, the youngest born twenty years after the oldest when my great grandmother was 42 years old. The baby is only eight months old in the photo.

I remember Great Grandma as a frail, but happy lady. She was always smiling and took incredible joy in visits from all of her children, grandchildren and great-grandchildren.

She passed away when I was four years old and I can remember being at the cemetery for her burial. I remember her so well because my mom often drove me and my brother to their home between supper and chores to check in. They lived only a few miles away on an old farm.

Autumn especially reminds me of Great Grandma. Their front room smelled liked fresh picked apples in the fall. They would store bushels and bushels of them there all winter since it was unheated and kept them cool enough to last.

I stalled out on Great Grandma’s birthday recipe. She is the origin of the pie crust recipe my mom uses, but I wanted to bake something that was in her handwriting. For the most part, I had assumed she was one of those cooks that baked from memory. I had trouble sourcing recipes from her when I put together the family cookbook. After it was printed though a family reunion turned up her doughnut recipe and some good memories. I was delighted to get the recipe, in her handwriting written on a card to another family member. 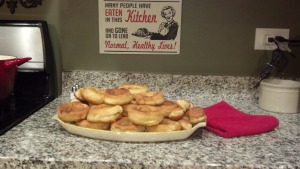 2 Eggs. Beat this with spoon.

3 cups Flour, but not all at once.

Mix well, but not real stiff.

Put flour on board and fold dough over and over to form a ball. Pat and then roll 1/2 inch thick and cut out. Fry in Spry or Crisco. Melt this in a frying pan so pan half full of melted. Drop piece of bread or a little doughnut ball to test if it is just hot enough to brown. And you can save this and use it over again. Say about 350 degrees and turn as soon as they come to top and then turn again until other side is brown. I think you’ve seen me make these before. It makes three dozen. The little balls make three dozen more. 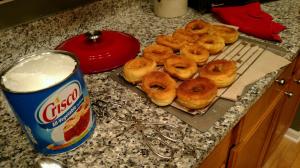 Her letter goes on to talk about the postage rate going up to 13 cents (making the letter written in 1975). She also talked about the crops – Army worms were in the grain and had to be sprayed. The field was turning golden and the corn was so high they could no longer see the neighbor’s farm.

Happy Birthday Great Grandma! I know your farm in Heaven has an even more beautiful view (without Army worms). 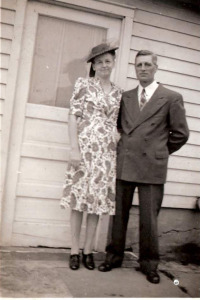