Posted on November 25, 2015 by Becky Brillon Leave a comment 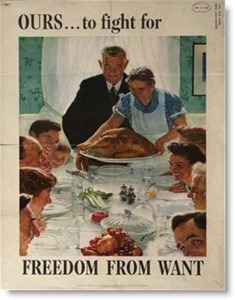 Norman Rockwell’s Freedom from Want painting is an iconic Thanksgiving scene of generations gathered around the dining table with a golden brown turkey as the focal point. The painting served an important purpose to keep Americans focused on the rewards of sacrifice that couldn’t be far off.

Turkey has never appeared in any of the WWII magazines or cooking pamphlets I’ve collected. The way we think of a full bird turkey now – an occasional meal for special holidays – was how families viewed chicken back in the 1940’s. All of the folks I interviewed for this project mentioned that chicken was a special meal, served less than six times a year. And for the family that could not find a chicken for the table, they turned to the field for a goose, duck, pheasant…and possibly a wild turkey.

From the menu in the wartime planner, I focused in on two recipes: Wartime Cranberry Sauce and Eggless Pumpkin Pie.

Boil corn syrup, sugar and water together 5 minutes. Wash cranberries and drain. Add cranberries to the syrup and boil – without stirring for 5 minutes. Remove from heat and allow to cool in the saucepan. Makes 1 quart of sauce.

Mix all ingredients together and pour into 9-inch pie shell. Bake at 450 degrees for 10 minutes, then reduce heat to 350 degrees and bake 30 minutes longer.

Cream cheese, ether in an electric mixer or in a bowl with a fork. Add all ingredients and beat well. Very good on gingerbread, apple or pumpkin pie. 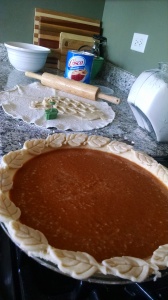 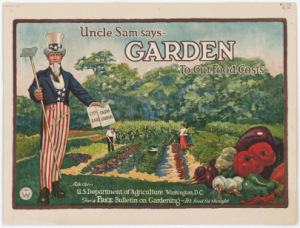 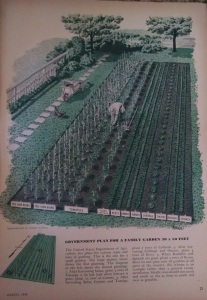 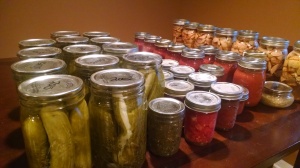