A Love Story for the Thanksgiving Holiday 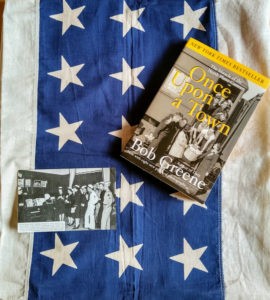 There is a story about WWII home front heroes that you most likely have not heard (unless you are living in Nebraska…and even then maybe not). It’s a very important story that must be preserved as a witness to what the American spirit was all about and hopefully can be reborn.

What may be defined as strange fate or ‘seek and ye shall find’ guidance, I came into possession of a book written by Bob Greene from a second-hand bookstore in Montello, Wisconsin.

The book, written in 2002, is titled “Once Upon a Town: The Miracle of the North Platte Canteen”.  The story behind the story is about a writer who is in search of “the best America there ever was”. I believe he found it and managed to share a story that needs to be honored, remembered, and retold as an example of the essence of America’s Greatest Generation.

The story (credit to John Deadline Enterprises, Inc.) — “During World War II, American soldiers from every city and walk of life rolled through North Platte, Nebraska, on troop trains en route to their ultimate destinations in Europe and the Pacific. The tiny town, wanting to offer the servicemen warmth and support, transformed its modest railroad dept into the North Platte Canteen.

Every day of the year, every day of the war, the Canteen – staffed and funded entirely by local volunteers – was open from 5:00am until the last troop train of the day pulled away after midnight. Astonishingly, this remote plains community of only 12,000 people provided welcoming words, friendship, and baskets of food and treats to more than 6 million GIs by the time the war ended.

In this poignant and heartwarming eyewitness history, based on interviews with North Platte residents and the soldiers who once passed through, Bob Greene tells a classic, lost-in-the-mists-of-time American story of a grateful country honoring its brave and dedicated sons and daughters.”

In a time when sugar was rationed, the women who took turns volunteering (some driving for hours pre-dawn to make it to North Platte) their pantry and made certain that every train had a birthday cake, knowing that someone on the train was very likely traveling to war on their birthday.

The trains would only be stopped for the time it took to fill the water tanks or load coal from the depot; typically only 10-15 minutes. But just those few minutes were enough to overwhelm the troops with the love, kindness, and memories of fried chicken, egg salad sandwiches, and cake. For too many on those trains who did not come home, it was the last good meal they would enjoy — a thought that was always present on the minds of the volunteers and the soldiers.

Bookkeeping records from a few of the women’s groups describe the unimaginable amount of baking and sharing that came with each volunteered day:

This was all precious food that would have gratefully been on their own tables, but lovingly donated and prepared with gratitude and love for another mother’s son on his way to war.

As Bob Greene described so well, the story of the North Platte Canteen is a “love story between a country and its sons” and a miracle.

It’s November as I write this – the time of Thanksgiving, with traditional thoughts centered around bountiful harvest and gratitude for the American graces of safety, community, and kindness. I hope it is within your reach to find someone with a story that stands witness to kindness that has not become rare or extinct in this country and perhaps honors a home front hero.

Posted in Food Fighting, Holidays, In the Kitchen, Make it Do, Sugar, The Way It Was