Hot in the Kitchen…And Everywhere Else 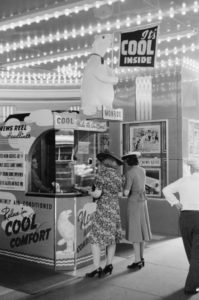 Although it was invented by Willis Carrier in 1902, air conditioning was not a home feature during WWII. It was used primarily for industrial quality control.

Air conditioning became an attraction during the summer of 1925 when the Rivoli Theater in New York City installed it as an experiment to see if summer receipts would be positively affected by such a posh comfort. Boy, was it ever well received!

Soon, movie theaters across the country were installing air conditioning systems and pulling in crowds that went to the picture show primarily for the comfort of cooled air and a couple hours of relief from summer heat. 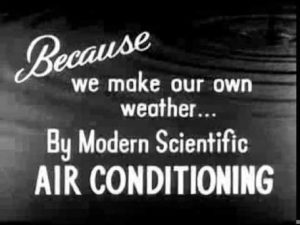 But how else did one survive the heat on the homefront during the war?

Building materials were different. Homes built from earthen materials have been proving their worth since Man lived in caves, but how often do we still find new construction of stone or brick? These materials kept heat out.

Buildings were structured differently. Think old-school, literally. Do you ever pass an old schoolhouse (becoming more rare by the day) and notice how different they are compared to modern school buildings? Back when school days were not called for being too hot, they were built of stone or brick with high ceilings, transoms, ceiling fans, and windows that actually opened and let in cross breezes between rooms on the opposite sides of the building.

Homes too, were structured differently. The layout of a typical floor plan had a stacked effect that allowed open stairways that vented heat up. Upper floors were used only at night with the windows open – hopefully with a breeze of cooler temperatures. 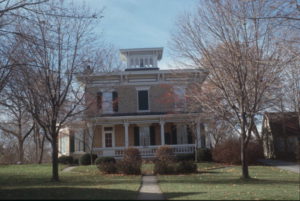 Turrets, cupulas, vestibules, or a widow’s walk were not just attractive on the top of a home, but also served the purpose of ventilating the whole house, or acted as a wind catcher no matter direction the wind blew.

Awnings and window hangs were added to shade out the sun. Shade trees were planted on the east and west side of houses to add additional shade.

And let’s not forget the importance of porches. Some were screened on all sides to create a sleeping porch and others simply served as a place to sit out away from the heat inside. 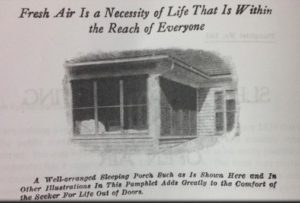 Iceboxes were called on for relief. Some folks shared stories of putting bed sheets or even their underwear in the icebox or freezer to bring the temperature down to comfortable.

Natural pools weren’t for scenic beauty only. You’d find people at creeks, streams, and lakes taking a dip or wringing out towels to wear around their necks while motoring through or working in the garden.

Kitchens were put to use. Summertime meals were no-bake as much as possible. Sandwiches with a variety of spreads, homemade lemonade, fresh from the garden salads and raw vegetables were typical. Cold soups were plain, but welcomed. No-bake desserts were perfected as refrigerator technology and community freezers became more common.

Following WWII, air conditioning was a noted amenity of newly constructed suburban homes to many newlywed couples. Adding modern cooling remains a big project to homes built prior to the war. As common as AC has become, most of us can’t imagine living without it and its constant hum in the background. Where winter used to draw us indoors to hibernate, air conditioning in the summer has accomplished the same anti-social act. Instead of sitting on the porch or under a tree with neighbors and iced drinks to cool off, we stay inside only going out to rush from our cooled homes to a cooled car on our way to a cooled store or office to do our day’s chores or errands (usually toting a light sweater in case the building is too cold!). Yes, we are miserable in summer’s heat but maybe we can be miserable together again sometime.

Posted in In the Kitchen, Make it Do, The Way It Was