Where Do You Fit In – Finding Your War Job

Posted on September 2, 2018 by Becky Brillon 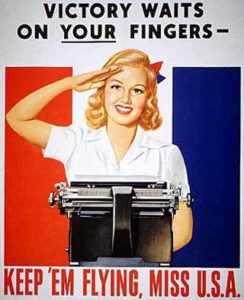 When the United States entered World War II, American women were called on to serve the nation in many ways. Unprecedented numbers of women entered the ranks of factory workers, helping American industry meet the wartime production demands for planes, tanks, ships, and weapons. It was through this aspect of war work that the most famous image of female patriotism in World War II emerged, Rosie the Riveter. At the height of the war, there were 19,170,000 women in the labor force. Between 1940 and 1945, the female labor force grew by 50 percent. (Source: Susan M. Hartmann, The Home Front and Beyond: American Women in the 1940s (Boston: Twayne Publishers, 1982).)

I just completed a quiz included in the December 1943 Woman’s Day magazine to help me determine “Where Do I Fit In”.  For women who were contemplating a war job, this quiz may have helped to correctly choose the best category to explore.

Women in Manual jobs were needed in canneries, meatpacking or agricultural work.

Painting and textile jobs were for making parachutes, cover airplane wings, do upholstery in planes, spray painting, doing insignia painting or being a “doper” on plane wings.

Scientific jobs were for schoolteachers, and they could do draftsman work, tool design, radio communications, color testing, work in the food conservation program, do food dehydrating, become a chemist’s aide or a meteorologist.

Clerical jobs “may not have the glamour of overalls and a blow torch”, but equally essential was the typist, file clerk, messenger, tabulating machine operator, stenographer and production clerk.

Service jobs were for ‘essentially feminine’ women who had “nothing aggressive or masculine in their make-up”. Think scientific child care, running day care nurseries, being a hospital aide, a dietician, teacher or athletic director. She could also run a cafeteria in a war plant.

Retail jobs for those “quick witted and easy to know” girls. According to the quiz, she can take up merchandising, be a stock girl or a checker or get a desk job. She could also fill a variety of jobs in banks, brokerage houses, or insurance companies.

Social jobs were for those “as gregarious as they come”…You probably talk too much but you are entertaining and gay and full of the joy of life so who cares?” These women were advised to become a ticket salesman, trainman, a reservation clerk, a Western Union gal, or a telephone operator.

Inspection and Supervising jobs were for those who did not like the detail work but were true-born executives at planning it for others to do. “You inspire confidence and if you will remember to keep a tight rein on that bubbling impatience of yours, you will have great success in handling other women. You like me and work well with them and you are probably smart enough not to let them know that you can out-think them in many instances. These are jobs for executive women. You’ll fit the bill for inspector or supervisor in war plant or private industry.” 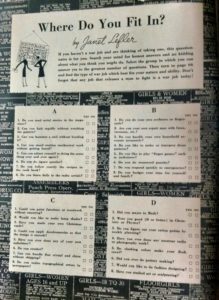 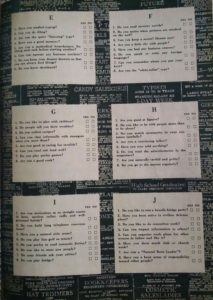 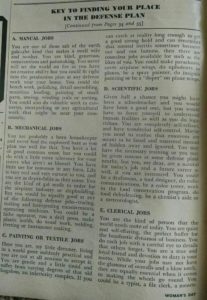 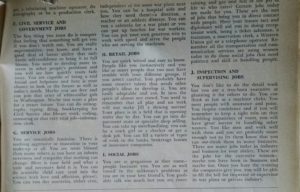 It turns out I tied in highest rank for two categories: Manual and Clerical.

Manual Jobs: You are one of those salt of the earth gals – the kind that makes a swell wife and mother. You are kind, generous conscientious and painstaking. You never will set the world on fire as you have no creative ability but you could fit right into the production plan at any defense work near your home. You could do bench work, polishing, detail assembling, munition loading, painting of small parts, sewing, winding coils or sorting. You could also do valuable work in canneries, meatpacking or any agricultural work that might be near your community.

Clerical Jobs: You are the kind of person that the world needs more of today. You are quiet and self-effacing, the perfect buffer for the bombastic dynamos of business. You do each job with a careful eye to details that others forget. You are a true and loyal friend and devotion to duty is your motto. While your jobs may not have the glamour of overalls and a blow torch, they are equally essential when it comes to making the wheels go round. You could be a typist, a file clerk, a messenger, a tabulating machine operator, do stenography or be a production clerk.

How much fun was that? Now, back to work I go!

Posted in The Way It Was