Archive for In the Kitchen 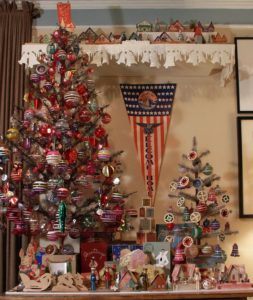 Americans on the home front wanted to know what they could do at home to do their part in winning the war. The mantra, “Waste Nothing” was always the short answer. Waste nothing meant efficiency of every possible resource and thing, including time and human energy.

Efficient home making was the goal in homes across America during WWII. In a Woman’s Day magazine ad during winter of 1943, extensive testing is described that proves the Old Dutch Cleanser with Seisomtite is more economical and efficient than any other brand. 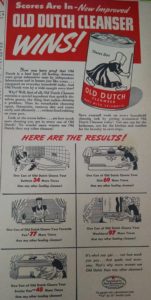 The ad goes on to say ‘you should get one can for the bathroom, one for the kitchen and another for the laundry to save steps.’  This is not a bad idea! I have located a cleaning supply kit on each floor on my home — the upstairs, main level, and basement level. Having all that I need without pulling it out and lugging things up or down stairs is actually a huge time-saver and nearly half the battle when it comes to just starting the project of cleaning an area.

WWII had everyone thinking about highest possible efficiency. By the time the war ended and between 1946 and 1949, the University of Illinois School of Architecture Small Homes Council-Building Research studies introduced the world to their “work triangle” design study. The work triangle continues to serve as a standard of good kitchen design. The sink, stove, and refrigerator serve as the cornerstones of the triangle that make it possible to reduce wasted steps in time-motion studies originated for industrial applications in the late 1800’s studied by Frederick Winslow Taylor.

Besides the work triangle itself, there are several rules of thumb to consider when planning a kitchen: 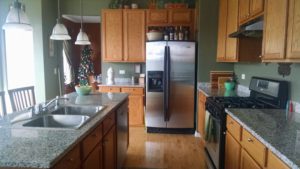 So, how efficiently designed is my kitchen? 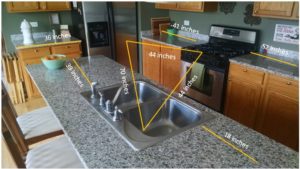 Posted in Cleaning, In the Kitchen, Waste
Recent Entries »