Regardless of the struggle I have with the recipes and ingredients and just the way of things on this project, I do not come anywhere close to the reality of home front living during WWII. I am most reminded when I read a letter from Chaplain John W. Hardy, dated 16 February, 1945.  The letter was given to me by one of the wonderful people I interviewed in connection with this project. 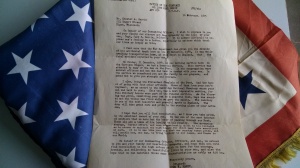 To: Mr. Chester A. Gerrie

On behalf of our Commanding Officer, I wish to express to you and your family our sincere and deep sympathy in the loss of your son, Capt. Jack S. Gerrie. It is always difficult to express one’s feeling in a letter, especially in matters which touch our lives as deeply as this.

I feel sure that the War Department has given you the details of his accidental death here on the 29 December, 1944. It was while awaiting transportation home, at this Depot in England, that the fatal accident occurred to your son.

On Sunday, 31 December, 1944, at our morning service here in the Garrison Chapel, we had a Memorial Service. This service was attended by many of the men on the Post. In the congregation were several officers and men who had been in combat with your son. In the service we remembered you and the family in our prayers, and asked god to give you strength and courage.

I also, being the Protestant Chaplain of the Post, had the honor of going with four other officers, three of them from your son’s regiment, as an escort to the Cambridge National Cemetery where your son was laid to rest. This too, was a most impressive service, for full Military honors were part of the funeral service. As the blessing was given, committing your son to a peaceful rest, taps was sounded and the volley was fired while we gave the salute. The cemetery is one of the most beautiful and peaceful spots in England. The Army will take great care and pride in the resting place of your noble son.

I hope that you will find consolation, as I know you take pride, in the excellent record of your son. He was one of the most decorated soldiers that we have had the honor of passing through our Post. These all are a token of his loyalty to his country, the unceasing courage, heroic effort, and warm companionship shown to his comrades as he strove to maintain the high ideals for which many have sacrificed so much. It is in men like your son that our country takes pride, and will enable her, one day, to bring Victory to our cause, and Peace to our World.

On behalf of our Commanding Officer, Officers, and men, we extend to you and your family our heart-felt sympathy, and hope that you will find consolation in the high esteem which we have for the courage, heroism, and fellowship so beautifully lived by your son, and also the hope that we can maintain those same characteristics as nobly as did he.

In WWII the common sight of Blue Star Banners in the window meant there was a family member of the home serving in the Armed Forces. Some homes had more than one blue star; each individual son, husband, father, was recognized by a blue star. A gold star pasted over the blue star represented the honorable death of the family member. For his parents’, Chet and Isabelle, Capt. Jack Gerrie’s star turned gold and the small community of Ripon, Wisconsin was given the unspoken signal to surround the family with prayers and loving support. 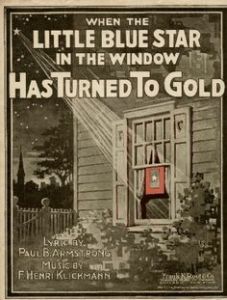 I was intrigued by the letter enough to research Capt. Jack Gerrie’s service a little further. He was, just as the Chaplain described, incredibly decorated. Capt. Jack Gerrie received the Distinguished Service Cross for his heroism on 23 & 24 August, 1944 near Fountainbleau, France. Later in October of 1944, he was an integral part of the battle at German-held Fort Driant. Several accounts of his bravery exist. In his own words, in a letter to General Patton, Capt. Gerrie shared the truth of a horrible scene. Enraged to see German troops shooting down American Medics while trying to retrieve wounded Americans, Capt. Gerrie sent German prisoners in their place. Seeing the German troops shooting the prisoners, Capt. Gerrie wrote, “We said to hell with it” and shot the whole damn bunch.” This information from Capt. Gerrie was left out of the US National Archived version of the After-Action Report. Patton himself wrote in his diaries he hoped they could conceal the unfortunate instances of prisoners shot.

A report from militarytimes.com adds a little more information about the hero’s death, but also conflicts with the Chaplain’s letter. According to the site, Capt. Gerrie, “While awaiting transportation back to his unit at a depot in England on December 29, 1944, after a 30-day leave back home in the United States, Captain Gerrie was killed when a captured German gun he was examining accidentally went off.”

I do hope the Military Times article is correct, that Jack had been home for 30 days during the holidays, and not that he was about to go home. Another detail gives my heart a little ease – somehow Capt. Jack Gerrie made it home to the US and is buried at Arlington National Cemetery. May he rest in peace. 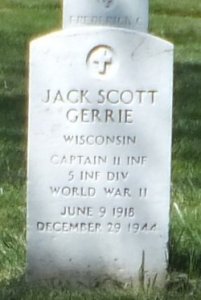