The Woman’s Day December 1943 magazine found at an estate sale provides us a glimpse into Christmas Past:

Christmas Gift from a Sea-Bee

“I have just seen a girl wearing with great pride a matched set of hand-wrought jewelry especially designed for her. A rare treasure, this lavaliere and bracelet set of shining white metal, and though the proud wearer does preen a bit, she is not to be accused of unwarranted vanity or unpatriotic giddiness. Her polished bracelet, with its entwined heart motif, her heart-shaped lavaliere, were both designed and engraved under the light of a tropical moon by her Sea-Bee husband. The shining white metal came from the wing of an American plane which dropped to rest on a coral strand, after it had put three Zeros in their proper place in Davy Jones’s locker. The lavaliere sways gently from its dog-tag chain. No perfectly matched string of pearls ever had a greater history, no royal bracelet ever a more impressive inscription – “Mimi and Bill forever”. As modern as the blonde young girl who wears it, as simply streamlined as the plane from which it was born, as sentimental as the most doting Victorian heart could desire – here’s jewelry of the hour, heirloom of the future.” 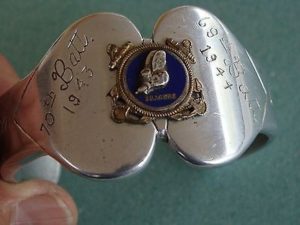 If you’re like me, you hope that Mimi and Bill had a victorious reunion after the war and wonder if the bracelet and lavaliere set still have a home in a jewelry box somewhere. Imagine the story of jewelry crafted from a WWI bomber could tell!

The 1943 ad for a relatively new series of Pyrexware helps us date the pieces that remain in use today.

Notice the Pyrex Double Duty Casserole has a cover that can serve double-duty as a pie plate.

Pyrex Pie Plates from the WWII era had ridged sides and in 1943 featured the first-ever easy-to-hold handles.

All are made of clear, see-through glass. (Highly-sought after Pyrex colored bowls were a 1950’s novelty. The bright colors and patterns were a lovely variation to these practical clear pieces.)

“Look for this label for your own protection”. The logo was important because not all glassware was hot-to-cold shatter-proof at the time. Pyrex had been made of borosilicate since 1915. It was an innovative thermal safe glass that could go from boiling hot and remain safe if ice cold water were added. In 1998, when Corning sold Pyrex to World Kitchen, LLC, a Chicago manufacturer, the glassware sold in the U.S. was replaced with lime soda glass. Lime soda glass is more resilient to dropping (anyone else have a mother who was ecstatic about her non-breakable Corning Ware plates in the 1990’s), but not as thermal protective.

Corning Glass Works is still around today, but only holds 8% interest in Pyrex (sold to World Kitchen, LLC).   As the makers of Pyrex during the war, the company was also called on to produce searchlight lenses, Army tableware, hospital supplies and other in the scientific realm, which remains today as its primary focus.

War Bonds – The Most Sensible Gift Under The Tree This Year

When was the last time you wore a corsage? Prom? Maybe Mother’s Day or for a wedding? Can you imagine if the corsage worn on any special day — a Sunday or night out — came back in style?

Money not wasted on flowers was better used to buy War Savings Stamps. But, not wanting to be left out of the pretty tradition, the stamps were crafted into a corsage.

“A War Savings Stamp corsage comes first on anyone’s gift list. From $1 up.” 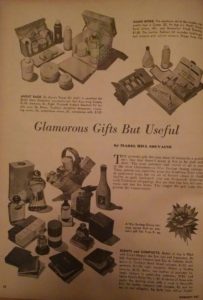 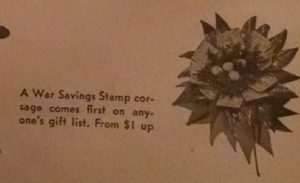 How practical was it? It’s hard to say. Magazines were allowed to stay in print through the war even when paper drives were held to aid in the war effort if they served the purpose of advertising war bonds. This ad was such an example of complying with the agreement. Discreetly tucked into articles and advertisements, such things are fun to spot and are a sign of the era. 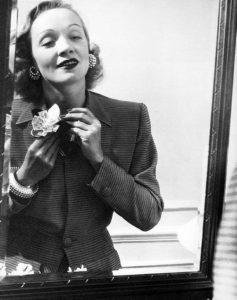 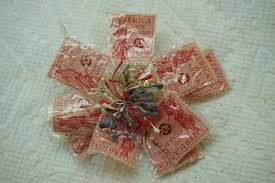 Posted in Holidays, In the Kitchen, The Way It Was