Posted on April 26, 2015 by Becky Brillon Leave a comment

I mentioned in Grandma Crook’s birthday post that another recipe that makes me think of her is Cornstarch Pudding with Raspberries. It’s sweet and simple. 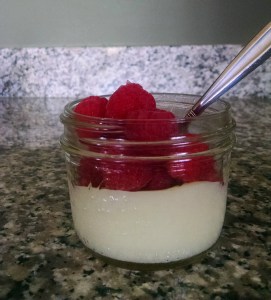 Grandma’s farm had several raspberry bushes in addition to a big patch of strawberries, cherry trees and apple trees. Once the berry/fruit season started in the early summer, it didn’t end until fall. Getting out to pick early before the sun became too hot was just something that had to happen every morning. And once the picking was done for the day choices about baking, jamming, canning and freezing came next.

In the same time it would take to make jam, but with far less sugar, this recipe is great for a creamy smooth dessert. 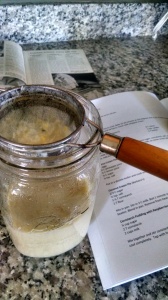 In a stove top pan, dissolve the cornstarch in the milk. Add the remaining ingredients and turn on the burner to medium. Stir constantly until the mixture becomes thick and starts to boil. Pour pudding through a mesh sieve to remove any cooked egg whites (ick…no one likes to eat that in their pudding!).Pour into individual size bowls/jars. Put in refrigerator to chill. Before serving, add fresh raspberries (whole or mashed) to the top.