Give Us This Day Our Daily Bread.

Posted on December 22, 2014 by Becky Brillon Leave a comment

The WWII Food Ration Project is now at two weeks. No one is starving, though we have had a couple of interesting meals and recipes that were on the slate according to the December 1943 “Health for Victory Club” guide that didn’t make it to the table. One of those is Blanc Mange…more on that another day.

I’d rather talk about what is working. Every now and then over the past few years I have tried to make bread. Homemade bread – and the smell of it – is a glorious thing! For a day. And by day two you have a brick. Case in point, the beautiful Rustic Bread I made in experimentation stage working up to the project. 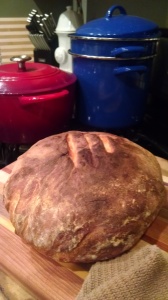 After day two of Rustic Bread we were no longer able to get a knife through it. My husband went to the back yard to toss it to the wild ducks. As he tells it, the bread skipped off the bank of the creek, hit the frozen ice, make a THUNK that echoed through the entire subdivision, putting a hole in the ice and sunk to the bottom. “Did you use a rock in that bread?”

Bread and “fortified butter or margarine” appear on nearly every single meal plan. Every interview I conducted for this project reported moms making bread every day. Sure, they were probably using up the loaf before it could transform to a backyard ice barge, but for my family of two – it just wasn’t happening. The 1943 book gave a recipe for Soya Bread, made out of soybean flour. I can find soybean flour, the only problem is that a four-cup bag costs the price of three loaves of bread.

As a long-time fan of America’s Test Kitchen on PBS and their accompanying magazine Cook’s Country and Cook’s Illustrated, I dug out the January/February 2014 issue with Easy Sandwich Bread. Advertised as “a tasty, even crumb and a tender crust,

requiring minimal kneading and no shaping, in less than 2 hours”, I tried it out. Cue the Hallelujah chorus angels. Not only did it require very little work (no bread machine, not even a stand mixer), it is now on day four and still edible. Day four!  That means I can use this as our daily bread but only need to bake it twice a week.

Now, if only butter wasn’t so heavily rationed.