Posted on April 6, 2015 by Becky Brillon Leave a comment 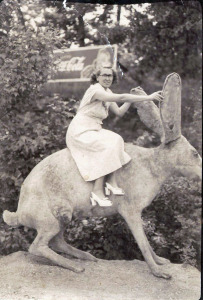 On this day in 1909, my Great Grandmother Mabel Buelow Crook was born. Everyone called her Grandma Crook. During WWII she was in her mid-thirties and living on a farm in Green Lake, Wisconsin.

Grandma and Grandpa Crook were probably part of the population least affected on the home front because they were farmers and doing an amazing job of living off the land before the war began.

Part of Grandma Crook’s legacy to my and future generations is that she loved to write. She kept a daily journal for years and took careful care to make sure the diaries were preserved in order for her voice and personality to stay with all of us.

On several occasions she wrote about her memories in story format, going back all the way to what she remembered about her grandparents. She chronicled every season of harvest from their gardens, orchards, barn, fields and from the lake itself.

She lived a life in perfect harmony with the seasons on the farm. An entire life history is easy to gather just from the food she prepared. When I remember Grandma Crook I think of her cornstarch pudding with fresh raspberries, strawberry glaze pie, dill pickles, baked beans, steamed cherry pudding, Thanksgiving dressing, and lemon meringue pie.

For Grandma Crook’s birthday party this evening I made lemon meringue pie (my all-time favorite as well). Some people view pie making as a chore, especially true for all the steps of lemon meringue pie, but I’m thankful I was taught at an early age how to make pie from scratch and enjoy the concentration of pie making.

Lemon Meringue Pie is edible patience and proof that good things come with taking the long way. Now that I look back through the list of Grandma Crook foods, it’s slow food and fresh-from-the-garden tastes that bring back memories of her.

So, to Grandma Crook I say, “Thank you for writing it all down and passing it down, Grandma. You’re never far away from us, especially at the table.” 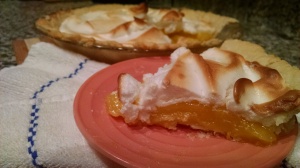 Crust: Mix 1 cup sifted Gold Medal flour with 1/2 tsp. salt and lard (or 1/3 cup plus 1 T hydrogenated shortening such as Spry, Crisco, Swift’ning, Snowdrift). Mix with fork until the mixtures forms crumbles. Sprinkle with 2 T water. Mix until the crumbles are moistened, but not much more. (My mother always told me the more you play with pie dough, the less tasty it becomes.) Once moistened, form into a ball and roll out with a rolling pin. Place into a pie plate and prick the bottom of the dough with a fork to prevent it from puffing up while baking. Put in a 475 degree oven for 8-10 minutes. Then, let cool.

Lemon Filling: Mix in saucepan 1 1/2 cups sugar, 1/3 cup cornstarch and 1 1/2 cups water. Dissolve all and then turn on the burner to medium. Stir constantly until the mixture thickens and boils. Boil one minute  and then stir the mixture into a separate bowl with three egg yolks. Mix well and then pour mixture back into the saucepan to boil for another minute.

Off the burner, blend in 3 T butter, 1/4 cup lemon juice, and 1 T grated lemon rind. Pour into the baked and cooled pie shell.

Meringue: Blend 3 egg whites with 1/4 tsp. cream of tartar until frothy. Mix in 6 T sugar and 1/2 tsp. flavoring (I use Penzey’s Lemon Extract).  With an electric mixer (how did Grandma do this without?!?!?!), beat the mixture until stiff peaks form. Pile meringue onto the hot lemon filling in the pie shell. Be sure to run the meringue to the edges of the crust to “seal” them, otherwise your meringue will shrink away from the crust as it bakes and you don’t want that to happen. Have fun with the meringue and swirl up some peaks and points on the pie. Bake at 400 degrees for 8-10 minutes.  Watch it close – meringue can go from delicately brown to burnt in seconds!

Let it cool for at least three hours. If you’d like to “weep” the meringue (honey-colored droplets on the meringue), put it in a draft while it cools.