Signs of a WWII Veteran

One hundred years ago today, at the eleventh hour of the eleventh day of the eleventh month, the First World War, which killed 40 million people, finally ended. Dubbed the ‘war to end all wars’, it was a day continuously prayed for and hoped for four years.

Twenty-three years later the United States entered the Second World War against all hopes that it wouldn’t be necessary. What happened to the shared notion that the world should never again be involved in such a regrettable tragedy as war?

Until 1954 Armistice Day remained the day to memorialize the lives lost in WWI and to honor its ending. Becoming Veterans’ Day, the holiday honored all those who served in the armed forces at any time.

US troops returned home in full force. There was shortage of boats, trains, buses, and automobiles to bring everyone home to their final destinations. Many had earned their ‘points’ needed to honorably discharge from the military and once they hit shore, were relieved of duty and free to go on their way in a very big hurry.

Shortages in civilian attire made it difficult to determine who was discharged and who was AWOL. It wasn’t possible for every soldier to simply change out of uniform into civilian trousers, shirts, or suits to become non-military. Therefore, the discharged soldiers were given a lapel pin to wear, signifying their approved departure from the military.

It was officially called the Honorable Service Lapel Button and was crafted of glit metal or glit plastic during metal shortages (the plastic versions were allowed to be traded in for a brass version when supplies returned to normal). Though the design is of an eagle standing, about to take flight with one wing outside of the button’s round border, the pin became known as a “Ruptured Duck” because the eagle didn’t quite look as regal as one would hope. 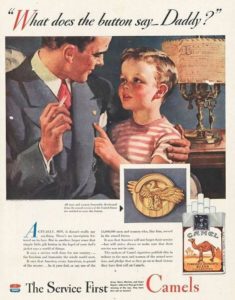 Some veterans wore the button on their civilian lapels for many years after the end of the war and it became widely used as an unofficial symbol of veterans’s pride.

Other signs of a veteran’s home was of course, the blue star banners hung in windows of homes. The number of stars represented the number serving from the same home. A blue star would be covered with a gold star if the serving family member died in service. 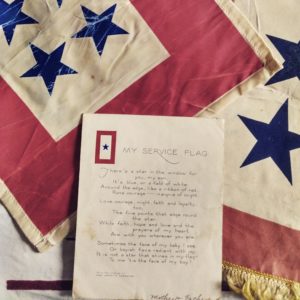 One more sign displayed, though not as often, was a welcome home banner. Many versions were used and are very hard to find circulating in antique shops or estate sales today. 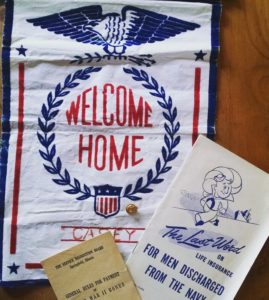 The military scrambled to discharge the troops efficiently, but there were many things to consider – life insurance benefits, payroll, bonus dollars, housing, certificates of honorable discharge — lots of paperwork to process. The Department of Veterans Affairs had only been established in 1930 and was still learning the best way to process the 16.5 million men and women who served during WWII (before computers!). It was quite an undertaking and involved many steps that could be mistakenly missed or skipped if not careful. Pamphlets were given to the soldiers, sailors, airmen, and marines in hopes of making the transition go smoother.

Today, Veterans’ Day 2018, an estimated 496,777 veterans of WWII are living. To each and every one of them I say — Thank YOU and may you live all your days in peace and comfort for the unfathomable valor of your service.  And to the home front veterans of WWII — Thank YOU for the inspiring example of courage, resolve and tenacity that would be impossible to replicate today.

Posted in Holidays, Memorial, The Way It Was