A woman by the name of Marjorie Child Husted was the Director of the Home Service Department within General Mills and became the woman behind the name Betty Crocker. You know — the cake mixes. The Betty Crocker we know today is a very watered down (pardon the pun) version of the hero she was to my grandmothers’ generation of homemakers.

Before television sets found their place in American homes, radios informed and entertained. Betty Crocker hosted radio shows and answered millions of letters from women who were charged with providing for their families through healthy and nutritional meals that would build strong bodies, steady nerves and high morale. “The eyes of the nation are upon you,” President Roosevelt told American women in February 1942. “In far-flung outposts, in the military isolation of camps near home, men at sea, men in tanks, men with guns, men in planes, look to you for strength.”

In one of the best books I’ve read, “Finding Betty Crocker: The Secret Life of America’s First Lady of Food”, by Susan Marks I learned everything about this remarkable “woman” named Betty.

General Mills’ Husted believed every woman was essentially a homemaker, regardless of whether she held a paying job, because the brunt of the cooking and housework was hers to bear. In 1944 Husted created the Betty Crocker American Home Legion Program. In her radio show, “Betty Crocker” shared these comments:

“Industry has developed a system of recognition for men. And men have the stimulus of competition with others doing the same type of thing they’re doing. But women in their own homes usually are working alone without that sort of stimulus – without the recognition of having salary raises or having the boss tell them they’ve done a good job – and without being cited as an example to others…And during the war years, you women have been doing double. Farm women have been taking the place of one or more hired men to produce the food to win the war. City women have gone into war plants and taken over war activities all along the line to help hold the home front safe and secure until our boys return. And in addition, most of these women are carrying on home duties too, working long hard hours to cover it all.”

The Homemakers’ Creed of the Home Legion: 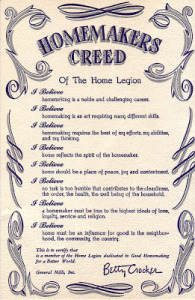 I Believe homemaking is a noble and challenging career.

I Believe homemaking is an art requiring many different skills.

I Believe homemaking requires the best of my efforts, my abilities and my thinking.

I Believe home reflects the spirit of the homemaker.

I Believe home should be a place of peace, joy and contentment.

I Believe no task is too humble that contributes to the cleanliness, the order, the health, the well being of the household.

I Believe a homemaker must be true to the highest ideals of love, loyalty, service and religion.

I Believe home must be an influence for good in the neighborhood, the community, the country.

This is to certify that ______________ is a member of the Home Legion dedicated to Good Homemaking for a Better World. Signed, Betty Crocker

The Home Legion inspired cult-like devotion, with over 700,000 women joining. Many women sent away for the scroll and proudly framed and hung it on their kitchen wall. I have done the same.