Posted on January 2, 2015 by Becky Brillon Leave a comment 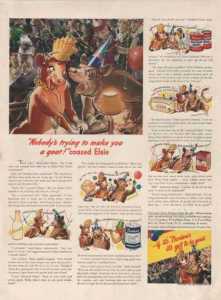 Through my work of discovering companies and food products that were available during WWII, I keep coming across Borden’s ads starring Elsie the sweet Jersey cow and Elmer her grumpy bull husband.

There is definitely something different about advertising from the WWII era. The word 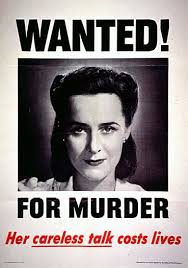 “propaganda” is thrown around a lot when it comes to the government ads asking for commitment and loyalty to the war effort. To the fact that the government was even taking out ads to sell war bonds and inform through pictures the need to not gossip, not participate in the black market for food – it seems a little bizarre today.

I’m not sure which came first, the company advertising or the government advertising, but they certainly influenced each other. Words were important to make the case of purchasing anything. There was great detail and careful attention given to words and complete sentences. For instance: “In spite of the heavy demands on American’s supply of meat because of the war, our share at home will be enough – if we use it wisely, learn to extend it with other foods – and make the most of every bit available.” This is a real advertising sentence used by General Mills. Today, it would read something like, “Meat. It’s what’s for dinner.”

Back to Borden’s. Somewhere along the way, even prior to the 1940’s, companies discovered the profitable sway of a mascot. General Mills had Betty Crocker. Aunt Jemima is  still the only name in pancakes and syrup. And Borden’s had Elsie. We moved to real-life celebrity mascots (by my calculation) at the time television sets took away our imaginative vision of characters. My dad has a story about my Great Uncle Willie ending his weekly obsession with The Lone Ranger when it went from radio to television. He saw the Hollywood version and it was a tragic let down of how he imagined his favorite star to appear.

People took time to read and write because that was the main form of communication over distance and it was the best way to gain important information. Elsie was a personified Jersey cow. Drawn out comic strip advertisements brought readers into her world and proof of the smoothest, most vitamin-rich, best-tasting version of milk.

So even when we see the advertisement above of a cow and her bull husband at a human New Year’s Eve party, wearing party hats, we believe she knows what’s right. If the talking cow said her Eagle Brand milk was the best – it must have been true.